… when she says this. I was working on it yesterday in between calls and no matter what I did, I couldn’t feel satisfied with it enough to justifying continuing. 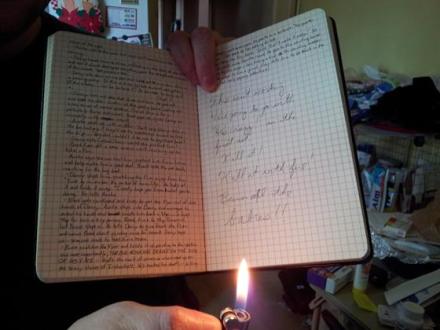 Drastic? Yes, but if you had read it you’d probably volunteer to hold the lighter.

So I am completely re-doing it (if you zoom in enough, you can see the notes and where it went awry) and going to try it again in between plumber visits and the Bacchanalia I have been invited to for tomorrow. Maybe today and tomorrow I can make up enough lost ground.

Here’s the problem: the hero (a very squishy everyman sort of person) is one of those reluctant types. In the outline, he was so reluctant, there was no real reason for him to leave and he had no problems with saying so. While part of the drama would be to have the hero dragged out of his comfort zone and face off against the villain and come back home better for it… but the character was not going to go anywhere – no matter how dire the danger was presented, nor how great the wealth offered, our hero was going to stay in the counting house until he died of old age. So, I went out and bought some lighter fluid and contemplated adding to the local haze. Then – inspiration hit me… one, in the form of an officer cruising by the house as I was going to dump the bottle of fluid in a glass bowl with the book and set it all on fire and the notion about possession.

Whenever I have read something dealing with possession (and I am guilty of doing this too), it’s usually shown that there is enough room – either head room or soul room – for two (or more in my book) distinct forms: the form of the possessor and the form of the possessed. While they may fight, bitch, complain or cooperate – there is always room enough. So I asked myself: what if when the main character is possessed by the spirit, he’s displaced? Now things started to fall quickly into place. Now the character has a reason to leave – his body is walking away and making a mess of things to begin with and he notes that the farther away his body is from his now bodiless spirit, the worse things feel for him. There could be other problems with this: he can’t be the only one who’s had this happen to him. He could find a particular ability to put himself into someone else’s body and displacing that person. He could run into a group of displaced people who have completely lost their bodies. This makes for a much better story and there are many more conflicts to undertake. I am excited again about this outline and I hope that today is a slow day enough for me to get into it. I am not really changing any of the characters: we’re going to have Village Cutie, Brock, Danny, Auntie and Bruce (not their real names – anyone who’s read my work know that I have a specific scheme for names, these are place names. Who the heck would name their kid Village Cutie? Not me.). I might even start with the names and use the right ones for the outline just so I can have something to refer to in the text.

By Golly – I am looking forward to this.

I need to get hopping on this.